After living here in the southern Pacific mountains of Costa Rica for 6 months, many things have impressed me with the country, the area, and the people. But nothing has impressed me more than the remarkable “can do” attitude of most Ticos.

Though I have many experiences to draw from, a recent New Year’s Day event sums up the Tico spirit nicely. We had packed up the Jeep for a multi day trip to the coastal resort town of Jaco (pronounced ha-CO) and headed out for the 2.5 hour drive. But on our way down the mountain, we realized the Jeep was seriously overheating. With the temperature gauge in the red, we pulled into a gas station to fill up and check out the problem. After adding additional water and coolant, we saw most of the liquid appear on the pavement…a serious leak somewhere.

It being New Year’s Day, the gas station attendant told me we’d likely have no luck finding a mechanic to help, and I suspected the same. All car rental locations nearby were closed as well, so were in a bit of a jam. We called our buddy Randy Madrigal to ask about getting a ride back to our house, and planned to cancel our trip. It turned out Randy was out of town himself, but he offered to call his mechanic friend on our behalf.

Michael Mora, the mechanic from Cortes, agreed to come and check out our problem to see if there was anything he could do. After looking around under the Jeep and under the hood, he identified a worn hose that was leaking coolant as quickly as it was added. Given the location of the hose, it looked like it would probably require a trip to the shop the following day. But while we checked into options for a ride home, Michael figured a way to access the hose with the tools he had. 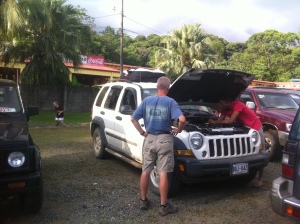 Now in need of a replacement hose and with everything closed for the day, Michael called his friend Alex who owns an auto parts business. Alex had the needed hose, and Michael was off to pick up the part. A few minutes later he was back under the hood of the Jeep replacing the hose. We added water to the vehicle, then started her up. The leak was solved and everything looked good. I asked Michael how much for the part and for his time, considering it was the one vacation day he had. “Sesenta”, he replied…sixty dollars. We happily paid Michael, and were soon on our way to Jaco…just a little later than planned.

I couldn’t help but think that in most situations, we would have been out of luck that day. But as we’ve seen over and over again since moving here, the average Tico doesn’t accept why something CANNOT be done. Instead, they concentrate on how it can be done. And fortunately for us on New Year’s Day, Michael Mora found a way to get it done. Pura vida!